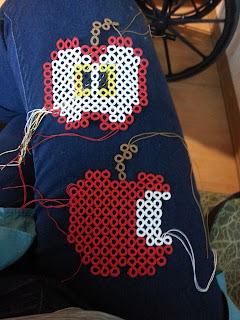 Color-bleeding happens when fibers get wet and dye leaches out into the water.

In general, there are several reasons why color-bleed can happen:
1.  Incorrect dyeing techniques (ie. wrong dye type used for the type of fiber) or poor quality dyes were used.

Red dyes in general are not more prone to bleeding than similar dyes of other colors. The problem is that red-dyed fibers are often dyed with a kind of dye called 'direct dye'.  Direct dye, whatever its color, tends to bleed in every wash, unless the fibers have been treated with a special cationic dye fixative. Using only cool water for washing will help, because higher temperatures decrease the ability of direct dye to remain associated with fabric.  Avoid direct dye, as well as all-purpose dye, which contains direct dye. Instead, use a fiber reactive dye.
For us as tatters, the why of color-bleed is really of no concern--the damage to the thread is done.  The issue is how can we control the color-bleeding?  How do we avoid color bleed from one area of a tatted piece into a different color region? (eg. My apple examples above.)

Posted by the shuttlesmith at 12:46 PM 2 comments:

Tatting Wordle of the Day 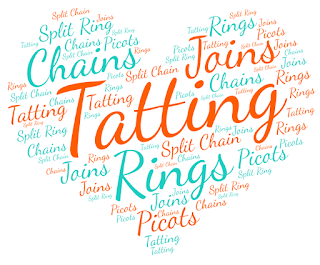 Posted by the shuttlesmith at 8:47 AM No comments: 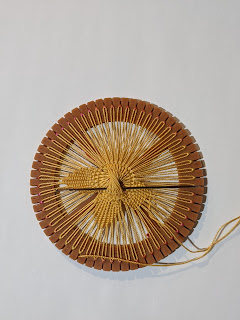 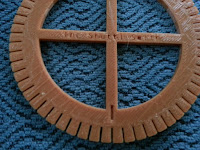 One of the 'OTHER' lace types that I study/teach/make is Teneriffe Lace. Another name for this lace type is Sol Lace. Sol is the Spanish word for 'sun'. This is a good descriptive name because many of the traditional motifs are round & have radiating threads (warp threads) upon which a design is stitched with a needle. Thus it is a form of 'needlelace'. To create the lace the warp threads are laid down in a overlapping, radiating fashion on some form of a 'loom'. There are many forms of looms. In my Teneriffe Lace classes, we use a plastic canvas shape which is cheap and (usually) readily available (Hobby Lobby, Walmart). There are many different antique looms from the past. Some looms are more cumbersome to use because they entail having to use a needle to manipulate many (think several) yards of thread in dozens of maneuvers to lay down the warp threads, all the while hoping that you have enough thread cut from the ball to work continuously.


The loom that The ShuttleSmith is recreating is a unique loom in that the warp thread can be laid down continuously from the ball of thread source. This makes the warping step fast. Another benefit of this loom is that it is reusable. It is used by Brazilian lacemakers today. I found reference to this style of loom in an antique German publication/book.


So I tried to recreate this style of loom in plastic for myself by using a 3-D printer. I called upon my newly-graduated son (in mechanical engineering) to create 'CAD' programs for several sizes of Teneriffe Lace looms to my specifications. The following photos show my teneriffe loom design being 3-D printed for the first time at my local library. Most libraries today have a 'maker space' of some form, many with 3-D printers. I paid a nominal fee to have my prototype loom printed. It did take about an hour to print but was fascinating to watch. 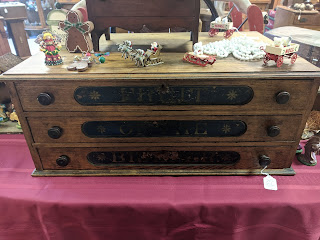 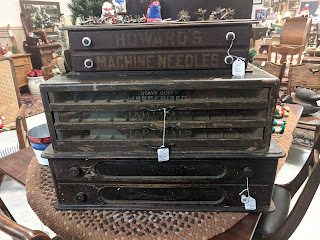 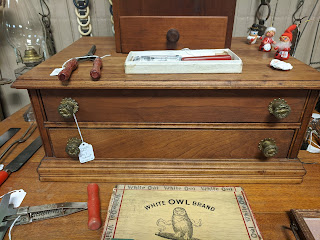 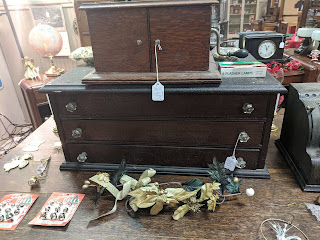 I just thought I would share some thread antique thread cabinets that I found in an antique store in my hometown of Wisner, Nebraska (population ca. 1200 people).  I was passing through town recently to or from visiting my family/parents and stopped in to find these beauties.  The local antique dealer has a great gig going on because many of the locals (mostly farmers) let him go into their homes and barns to 'pick' (think 'cherry-pick') their antiques. My own family is one of them that 'invited' him into our lives to rid of us of our 'junk' that he turns into 'antiques'.


I haven't bought one yet. I'm still waiting for the perfect one from a thread company that I know and love.

I'M READY TO BE QUARENTINED!!!


I have been taking inventory of my thread stash & have a bunch of patterns ready, HOPING that I will get quarantined! However, it is just wishful thinking that I would get two weeks to tat. I work full-time in healthcare and in healthcare it’s like “…we ride at dawn, bitches!”. There is no ‘working from home’, at least not for those of us actively providing technical services. I am the lead of two clinical (think diagnostic) specialized laboratories at the Nebraska Medical Center. My main, active job is as an Electron Microscopy Technologist working with human kidney & muscle specimens with the end goal to get to the proper disease diagnosis which then leads to the proper treatment for the patient.
Posted by the shuttlesmith at 12:36 PM 2 comments: 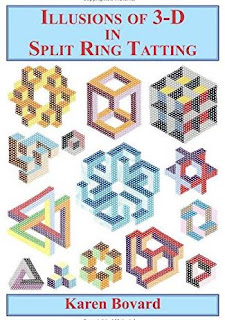 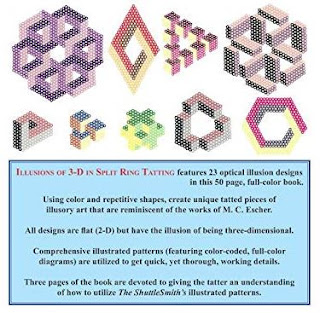 Well, since it's International Tatting Day, I will celebrate it by announcing that I have a new tatting book published. It's number 8 in my 'Fun with Split Ring Tatting' series. It's titled "Illusions of 3-D in Split Ring Tatting". You'll either 'love' or 'hate' the designs. I had a lot of fun creating these. I love the way color and geometry can trick your eye into seeing something flat as being three-dimensional. Right now they are only available on Amazon....

I have been busy with The ShuttleSmith projects in the last year, you just haven’t seen any of it here.
I have been occasionally posting to my TheShuttleSmith Facebook page, probably because it’s a bit easier to do so and because I had lost the address/password to my website at work when I had to get a new computer.  Actually it was two new computers because they (my employer) said my computer(s) were compromised with a virus.  They pointed to my attempts to go to Georgia Seitz’s pages, which when I try to go there comes up as blocked by the companies software.  I told them ‘yes, I had tried to go to that website’ but that I didn’t understand why it was blocked.  Anybody have this same issue with Georgia Seitz’s website????  But I digress….It was due to this blockage and thus suspected virus alarm that my employer gave me a new computer…which in turn wiped out all my bookmarks and stored passwords…which is why I couldn’t get into my WordPress software to create blog posts as easily.

What I’ve been doing in 2018 synopsis (tatting related):
I have been working on book number 8 in my ‘Fun with Split Ring Tatting’ series.  It seems to me that these books are what keep the spark in my tatting world.  I just love every step of the creative process.  I originally titled this book ‘Mathematical Designs in SRT’ but now that I am about 90% done with it, I think it will be called ‘3-D Illusions in SRT’.  It will be one of those books that you will either fall in love with the uniqueness of the designs or totally hate…but I’m going to publish it anyway.  More about this book and designs in upcoming blog posts.

I have been working with a very talented tatter (Diana Howe) to tat many of my designs into real thread because I just don’t have the time anymore to keep up with tatting everything in my books myself.  (Keep in mind that I work full-time.)  More about my relationship with Diana in upcoming blog posts.  I may also post about my unique full-time job.

Last year (2017) my time was totally devoted to moving (physically) from one house to another.  I didn’t even get around to getting a real vacation.  This year was different.
I still have a shop on Etsy.com where I sell my books and enameled tatting shuttles (shop name: TheShuttleSmith).  I will be spending more time in the near future updating my Etsy shop, probably with more/new shuttles & all my books.  More about my Etsy listings in upcoming blog posts.  You will probably see postings about how I create my enameled shuttles too.

I just recently was given a huge stash of vintage enamel supplies to use in my enameled tatting shuttle production business.  I just got them organized so that I can use them.  I am looking forward to experimenting and using them in the very near future.  Enameling gives me a different creative outlet to experiment with using ‘color’ and ‘enameling techniques’.  So look for upcoming blog posts on new enameled tatting shuttles and enameling techniques. You will probably see postings about how I create my enameled shuttles too.

I have been asked to teach 2 tatting classes (plus one short Teneriffe Lace class) at the upcoming 2019 IOLI Convention in Spokane, Washington. I love that venue because each class is 4 days, 3 hours of class per day...so we get a lot of time to explore a technique or idea.  So I spent some time this summer working with Patti Duff, the Convention Tatting Teacher Coordinator to design two unique tatting classes:
I’m nicely settled into my new home in Iowa.  Other than mowing the fairly big lawn of a small acreage, the house hasn’t taken up too much of my free time.